Improve your Performance with a Goalkeeper Rebounder Net

Some of the most innovative coaches in soccer have been goalkeeping coaches and they have been using a range of different equipment to develop the skills of goalkeepers for many years. Frans Hoek is a great innovator who has worked at Ajax, Barcelona, Bayern Munich and Manchester United and virtually redefined the role of the goalkeeper with his coaching style. He’s a strong believer in training aids and thinks goalkeeper rebounder nets are integral to the development of any young keeper as they can be used to enhance a range of skills both handling, saving and kicking the ball. 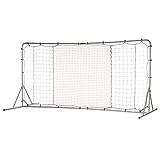 They are used heavily within youth academies and professional clubs to develop their pool of goalkeeping talent. Watch this video of highly regarded goalkeeping coach Andy Collet using different Goalkeeper rebounder nets to develop the skills of his players:

Work on your Reactions

Some people would argue that hand eye coordination is one of the most important attributes for any goalkeeper. Certainly the best goalkeepers in the world have incredible reflex actions and can save ball which might be hit from only a few feet away.

There is a whole nature vs nurture debate that goes on in the game about how naturally gifted goalkeeper's are to be able to deal with the ball when it is fired at them and react in a fraction of a second to make a save.

Evidence shows unquestionably though the more you work at this the better and quicker your reactions will be. A goalkeeper rebounder net is one of the most important tricks of the trade when developing reflexes.

Soccer Rebounder Nets are selling like crazy now, so why don't you jump on over to Amazon, grab yourself a bargain and start practising your skills TODAY!

Working with soccer rebounders can give you a real advantage and enable you to put this work in to be the very best you can be. Watch these drills for excellent examples of how to sharpen your goalkeeping reflexes:

As the game has developed in recent years with goalkeepers having to play so high out of their box to sweep in behind the defence as new the new breed of head coaches are keen to maintain high defensive lines, it has demanded goalkeepers develop a new range of ground skills that allow them to cope with the ball arriving at them outside of the box in any number of ways.

It could be a pass back from a defensive player or an attacking ball over the top of their defence at pace which they have to cope with. It is not enough to simply smash the ball out of play any more. Modern goalkeepers are expected to cope with it and find a team mate to restart attacks and build up play.

This requires endless hours of practicing to become not only good goalkeepers but also good footballers. Soccer rebound boards are one of the ways that goalkeepers are able to get their practice hours in to develop their own range of passing skills.

Watch this video to see some basic passing drills with a soccer rebounder to get started. It’s not difficult to imagine that receiving the ball from the rebounder is just like receiving a pass back from a team mate as a goalkeeper.

Controlling the ball, scanning the field and making the next pass are important skills for a goalkeeper because when playing forward into your teammate your passing has to be secure:

Passing from the goalkeeper into the defenders has to be the most secure passing on the pitch. Play can only be built up from the back with safe passing!

A soccer rebound board can be set up to provide a range of different challenging balls to control and pass.

Ultimately though Goalkeeper rebounder nets are one of the best ways that goalkeepers have been using for their all round game and making them better at the job they are ultimately required to do – keep the ball out of the goal.

Watch this intense session at the Everton academy for an idea of the level of intensity and work that is needed to become a top keeper:

Only if you are working to this level on a consistent basis will you or your goalkeepers truly be the best they can be.

Probably the best soccer rebounder on the market for goalkeepers as you can adjust the angles so that the ball flies out in different directions, making it ideal for reaction saves.

This is also a robust model so you can really get some power into the shots and saves from this model.

Also, great for your distribution drills

This is a super bit of kit for goalkeepers to work on their handling and catching of high balls.

Great for improving your ability to take catches in the air as the ramp provides great lift for any balls kicked into it.

Also has a net on the reverse of the rebounder that you can use for working on your closer reaction drills.

This is featured in one of the videos above and as it has multiple sides to the rebounder it is a great tool to have if you are having training sessions with more than one keeper.

The rebounder has high tension, which means that the ball comes back really quickly so is great for your ground work and reaction saves.

Check Out our range of Soccer Tshirts

USA Soccer Fans Jersey | Gift for Supporters of US...
Buy on Amazon